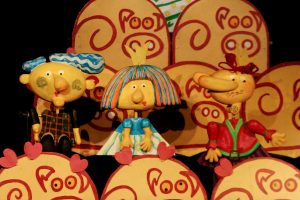 If you were a princess, would you rather have a rose from a grave, sent to you by a mysterious prince or a doll which says ‘mummy’? This princess preferred a doll, and not even the singing of a nightingale couldn’t comfort her. Insulted because the princess did not grasp the real meaning of his gift, the prince decides to punish her. Disguised as a dirty swineherd, he makes a little pot with small bells and a music box. The princess likes the two toys very much and as a sign of gratitude, she pays the swineherd with kisses.

The show was made in cooperation with the ZAPIK Theatre. At the international Lutkovni pristan Festival in 2000 it was awarded the 25 zvezdic Children’s Choice Award, and participated the Biennial of the Slovene puppeteers in Maribor in 2001.